History Made! UK Gets Her First Female 'Toppest' Judge

Many years ago women were clearly marginalized, but this sleazy vice is well on a swift fall as women now, say, run for huge political positions, and get to top positions in their own 'right'. History will be made as Baroness Hale, age 72, will get appointed as UK's first female top judge, that is, the chief judge of the Supreme Court. 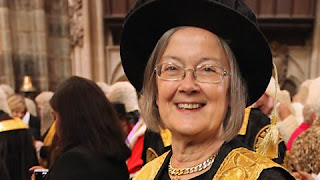 With its official website at Supremecourt.uk, the Supreme Court is the final court of appeal for civil cases in the UK, and criminal cases from England, Northern Ireland and Wales - which means it considers cases where an order had already been made in a lower court and is being challenged.
Perhaps not for the sake of feminism, she has previously criticised the judicial appointments system for selecting from a pool of predominantly white men from similar economic and academic backgrounds.
As regards her appointment, in a statement Number 10 said the family law expert would take up the position following the retirement of Lord Neuberger in September, having been his deputy since 2013.
As of 2013, she has said: "I look forward to building upon his pioneering achievements, including developing closer links with each part of the United Kingdom, for example by sitting outside London, and improving the ways in which we communicate our work to the public.
A question that must be asked here is whether Hale will be competent in the towering position? Here's what Andrew Langdon QC, the chairman of the Bar, said: ''It is well known that Baroness Hale is a most distinguished jurist and has long been at the forefront in the task of arguing for a properly diverse judiciary.
In this connection, having the society in mind, she has also said: "Recent high-profile cases mean that more people than ever before have heard of the Supreme Court, and we hope that this will help to create a broader understanding of how the judiciary serves society."
October 2 will be historic as Lady Hale will be officially sworn in as president on that day. She will be, along with three new justices. Of whom one is a female - the second female judge, Lady Justice Black.

All contents on World Web Surfers by Emmanuel Obarhua are licensed under a Creative Commons Attribution-NonCommercial-NoDerivs 3.0 Unported License. Based on his work at WorldWebSurfers.com. Permissions beyond the scope of this license would only be granted by Emmanuel Obarhua. You are only granted permission to copy content on this site with a link back (backlink) to the content.

Emmanuel also built some of the gadgets on this site. If you have a blog or a website and wishes to beautify it, you may drop him a line. Emmanuel owns WorldWebSurfers.com, and He is open to messages.
Kindly follow him on twitter; @worldwebsurfers | Google+ | Facebook fanpage | Bloggers.com